Church Times: COP26: Faith leaders ‘all on the same page’ about climate

The Rt Revd Graham Usher, Bishop of Norwich, chairs the launch of the Green Church Showcase in St George’s, Tron, in Glasgow, on Tuesday. The Showcase, a joint production by the Church of England’s environment programme and the Church Times, highlights seven projects from different denominations. Also speaking at the launch were Dr Ruth Valerio, from Tearfund, and Richard Black, from the Energy and Climate Intelligence Unit. Read more about the Green Church Showcase in this Friday’s Church Times (5 November)

THE Anglican Communion is helping to give a voice to vulnerable communities during the COP26 summit in Glasgow, the Bishop of Reading, the Rt Revd Olivia Graham, has said.

Bishop Graham, a member of the Church of England’s environment working group, has been at the summit this week, among the many Christian people and organisations lobbying and praying in Glasgow.

“Leaders from all faiths are on the same page about climate chaos and environmental crises,” she said. “When we focus on something as big as this, our differences fall into perspective.

“With tens of millions of members across 165 countries, the Anglican Communion brings a global perspective to the conference that’s untainted by national interests. One of the many benefits of an Anglican presence here is giving voice to the plight of the small island states, which are already becoming slowly submerged by rising sea levels.”

The Archbishop of Canterbury met President Wavel Ramkalawan of the Seychelles — one of these small island states — on Monday. The Archbishop posted on Twitter a photo of the two men praying, and wrote: “It was an honour to meet with the President of Seychelles, who as well as leading one of the world’s smallest islands is also an Anglican priest. We spoke and prayed together about the climate crisis, and the Christian calling to work for justice and never give up hope.”

The UN summit began on Monday and Tuesday with a segment focused on speeches by world leaders, some telling of their hopes and fears about the climate crisis and outlining the actions their countries will be taking.

Bishop Graham said: “The pledges made in the first days of this conference are good, but we need to hold our leaders to account on delivery. There are terrible consequences for our planet if we fail. Looking ahead to the rest of the conference, I hope that climate finance will become front and centre in the discussions here in Glasgow, and pray that the voices of indigenous peoples are listened to during the negotiations.” 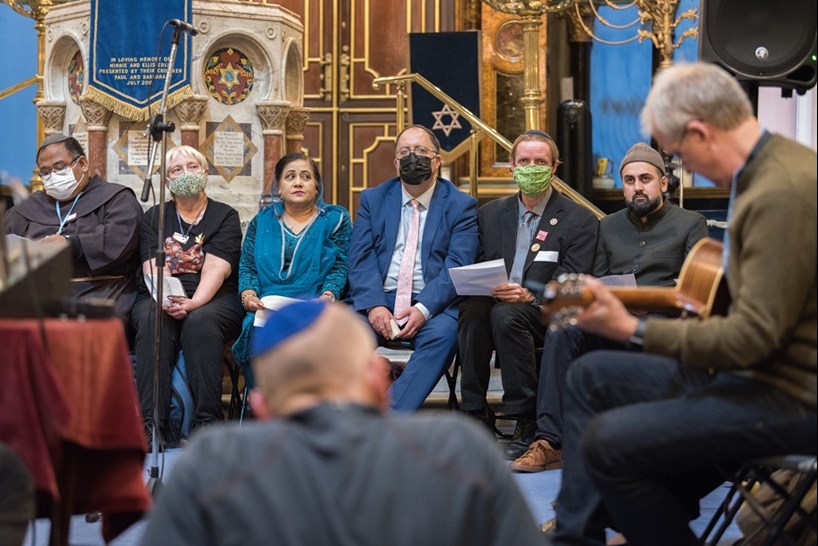 ALBIN HILLERTAn interfaith service in Garnethill Synagogue, Glasgow, on the opening day of the COP26, attended by representatives of more than ten faiths

Among announcements that have been made so far are a commitment by India to reaching net-zero greenhouse-gas emissions by 2070, and to have half its electricity powered by renewables by the end of the decade.

More than 100 countries signed a new commitment to halting, and reversing, deforestation by 2030, and committed more than £14 billion to doing this. There was also a new agreement to reduce methane emissions, which are one of the most potent greenhouse gases, caused by the mining of fossil fuels as well as some farming practices such as cattle-rearing.

The early days of the summit were marked by huge queues. Although the president of COP, Alok Sharma, said that this would be “most inclusive COP ever”, many civil-society delegates were excluded from numerous parts of the negotiations.

Glasgow residents also experienced disruption as police blocked off parts of the city centre when world leaders attended an evening reception with the Prince of Wales.

Despite this, the Primus of the Scottish Episcopal Church, the Most Revd Mark Strange, said that Glasgow was taking it in its stride, and local people were helping lost visitors with the friendliness that the city was known for. “The Scottish Episcopal Church has been working alongside the Anglican Communion delegation,” he said, “and we’ve also spent time with the World Council of Churches delegation, ensuring direct communication between those inside the Blue Zone and those seeking to have a say from outside.

“I have had the privilege of helping to present the Glasgow Multifaith Declaration and an interfaith vigil in the centre of the city. We are present, praying, worshipping, and sharing with many organisations and individuals. These have included buying sleeping bags for chilly overseas delegates, sharing worship in the cathedrals and churches of the city, marching with activists, and sharing our stories. Above all, we are here praying and encouraging.”

SCOTTISH EPISCOPAL CHURCHAnglican representatives at COP26, among them the Primus of the Scottish Episcopal Church, the Most Revd Mark Strange (centre, rear), and next to him, the Archbishop of Canterbury

He said that he was taking seriously efforts to help tackle climate change: “The SEC, and those of us in Glasgow for COP, are very aware that we’re not doing this for ourselves but for those who were unable to travel, and those whose lives and communities will suffer most from climate change: our partners across the Anglican Communion. The power of the Anglican Communion is that we share our values with people across the whole of the world, highlighting the needs of every person in every community.OTHER STORIESCOP26 leaders who do not rise to climate crisis will be ‘cursed’, declares WelbyTHE Archbishop of Canterbury set the stage for the opening of the COP26 climate summit in Glasgow by telling political leaders that history would judge unsparingly their efforts, or lack of them, to tackle the crisis

“The Scottish Episcopal Church intends to be carbon-neutral by 2030. We have disposed of all direct investment in fossil-fuel extraction companies, and currently have no indirect investments in fossil-fuel extraction. We are also about to publish a toolkit to help individuals, congregations, and, in fact, the whole institution, to make the necessary changes to help meet our target. We are trying to be proactive, not simply reactive, to the situation around us. This is our home, and we follow its creator.”

This entry was posted in Uncategorized and tagged Archbishop of Canterbury, climate crisis, COP26, interfaith, protest. Bookmark the permalink.

This site uses Akismet to reduce spam. Learn how your comment data is processed.

This website uses cookies to improve your experience while you navigate through the website. Out of these cookies, the cookies that are categorized as necessary are stored on your browser as they are essential for the working of basic functionalities of the website. We also use third-party cookies that help us analyze and understand how you use this website. These cookies will be stored in your browser only with your consent. You also have the option to opt-out of these cookies. But opting out of some of these cookies may have an effect on your browsing experience.
Necessary Always Enabled
Necessary cookies are absolutely essential for the website to function properly. This category only includes cookies that ensures basic functionalities and security features of the website. These cookies do not store any personal information.
Non-necessary
Any cookies that may not be particularly necessary for the website to function and is used specifically to collect user personal data via analytics, ads, other embedded contents are termed as non-necessary cookies. It is mandatory to procure user consent prior to running these cookies on your website.
SAVE & ACCEPT